Find Your Flow, a Contemporary class series, differs from the typical Master Class in the way that the lesson plan is directly influenced by and founded upon Mihaly Csikszentmihalyi’s Flow Theory of Psychology. With the increasing popularity of Master Classes in younger generations of dancers and dance communities, dance educators find themselves presented with new opportunities to influence artists for shortened periods of time, often serving as a breath in the midst of the chaotic routine of their seasonal performances and responsibilities. Through extensive research and concentrated course selection, I designed a lesson plan to be taught at each of the three classes which were a part of this series, appealing to a variety of populations and training levels.

Over the past four years, much of the teaching I have done has been short time frames spent with populations of students where I leave immediately after teaching class and perhaps do not see them for another year or so. My curiosity with this fad is how to effectively structure these short time periods (usually 2 hours) with students in a way that can benefit them in the long term. Developing a year-long lesson plan for weekly classes is one thing, but how can teachers make a similar impact on students that they see only once? As I continued to pursue my Developmental Psychology minor and take courses such as Psychology of Creativity and Positive Psychology, I began to see the benefit in this flow state as a medium of getting the most out of such shortened time. If your brain is fully engaged in material to a point of lost consciousness, it would only make sense that new intellectual, artistic, and kinesthetic discoveries could be made by students involved – or at least that was the initial thought that prompted this series.

Each of the three classes taught followed the exact same lesson plan, based off of the previously stated eight characteristics of the flow state. To facilitate complete concentration on the task at hand, class consisted of only a warm-up, combination, and cool down, rather than including other aspects such as across the floor, technique, etc. This was then stated as a clear goal at the beginning of class, laying the class timeline out on a poster at the front of the studio for students to view at all times. To further promote this clarity of goals, we set personal goals at the beginning of class through a guided mindfulness technique and checked in with these goals after each aspect of class to assist in immediate, intrinsic feedback – in addition to the immediate feedback offered by my verbal cues. In order to transform time in the two-hour period, I taught the combo very specifically – first quickly, then slowly with details, and then a quick review – and followed a carefully timed out lesson plan to ensure that students would be constantly moving from the start of class to the finish. For the intrinsic nature and ease that the

flow requires, I monitored my verbal cues and experimented with various forms of positive feedback. Additionally, I created a “Flow Board” – a posterboard used for silent conversation which students could write their thoughts on throughout class and use as a mode of in-time reflection. The center combination is where the balance of challenge and skill was extremely evident, as each combo was specific to the skill of the population I was expecting and incorporated a section that repeated at least once. In choreographing this way, students were able to focus more on the movement rather than the process of memorization. Finally, students were able to engage in the last two characteristics – loss of consciousness and control over the task – through our personal goal setting and check-ins throughout the class. There were no expectations of performance set by me, as an Instructor. Rather, I functioned as a guide throughout the experience through verbal cueing, physical demonstration, and the use of the timeline posters at the front of the studio space.

In observing each class, I could feel my passion for education re-igniting as I witnessed students embracing the material in their own way. For some, they were incredibly comfortable with the new challenge that this class brought to their studio. For others, they were hesitant at first, but slowly became the leaders of the group: reflecting on the Flow Board after every exercise and ultimately volunteering to perform the final combination as much as they could before class time came to a close. Perhaps one of the 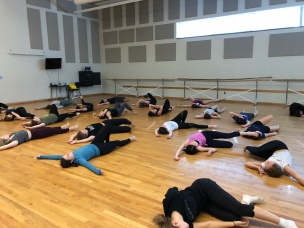 greatest variations in embrace was seen in the class taught at OSU Dance, where there was an extreme diversity in training backgrounds amongst the students taking class. From people pursuing their BFA Degree to those who have only had dance training in the musical theatre realm, students worked with one another on the sides and encouraged each other to brave the new challenge with an open mind and heart. It was truly amazing to witness those who had never experienced contemporary dance end up at the front of the group as they performed the final combination for the last times. By the end of the class, the varied levels of training and technical proficiency were less evident, and the sheer desire to move and share space with one another became the most prominent. Not only were these artists learning from one another, but they had created a community, flowing from one mindful movement to the next.

Ultimately, this project served as an inspiration to me to bring the underlying theme and value of flow to the forefront of my pedagogy. Throughout my time at The Ohio State University, my studies in Psychology have led me to making adjustments to my teaching styles and strategies, in addition to the Dance Education courses taken in the Department. The importance of finding and feeling this flow is something that has led me to edit lesson plan structure, timing, and the way I choose to segment material throughout the year. This project, however, granted me the permission to make flow the priority, and the results I saw in the students’ fully embodied movement and engagement in class led me to deciding to continue with this pedagogy. I believe that this is what makes me unique as an Instructor and what will continue to set me apart from others in this field. As educators, we are all essentially teaching the same techniques and methods, but we have to find ourselves in the material that we teach in order to connect to our students on a deeper level – and this project helped me to do just that.

To read my final Senior Thesis Paper in its entirety and learn more about my research, results, and conclusion, click here to be redirected to the Ohio State University Knowledge Bank, where my work has been published among other undergraduate and graduate student research projects.

Be a part of my journey as I discover, love, & share my soul – moving and grooving across the globe