In February, our Composition I class with Daniel Roberts studied what it meant to derive inspiration and movement from still portraits and photographs. Of the many studies that we experimented with and performed, this particular duet which I performed with Alize Raptou sticks out to me as a moment which I began to find some new movement vocabulary. 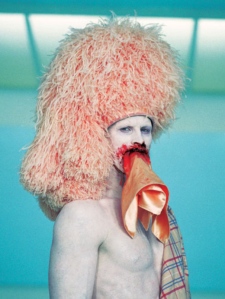 Deriving inspiration from Matthew Barney’s “Her Giant – Cremaster Cycle 5” (1997), we chose to choreograph movements which illustrated the structure and movement of the colors within the photograph. As seen in the image, this particular photograph is not one that I would normally be drawn to, due to the semi-morbid content. However, as a pair we were intrigued by its oddities and were especially drawn to the way that the articles of clothing and various props were both placed
on the subject and protruding from him.

Viewing the video below, see if you can interpret our movements and connect them to the image. Despite the fact that our movement was specific to our perspectives, one of the most important things learned from this study was that there are a variety of perspectives that can aid one in creating a compositional work. Often, it is important to acknowledge all of these options prior to establishing your own concrete ideas.

Be a part of my journey as I discover, love, & share my soul – moving and grooving across the globe